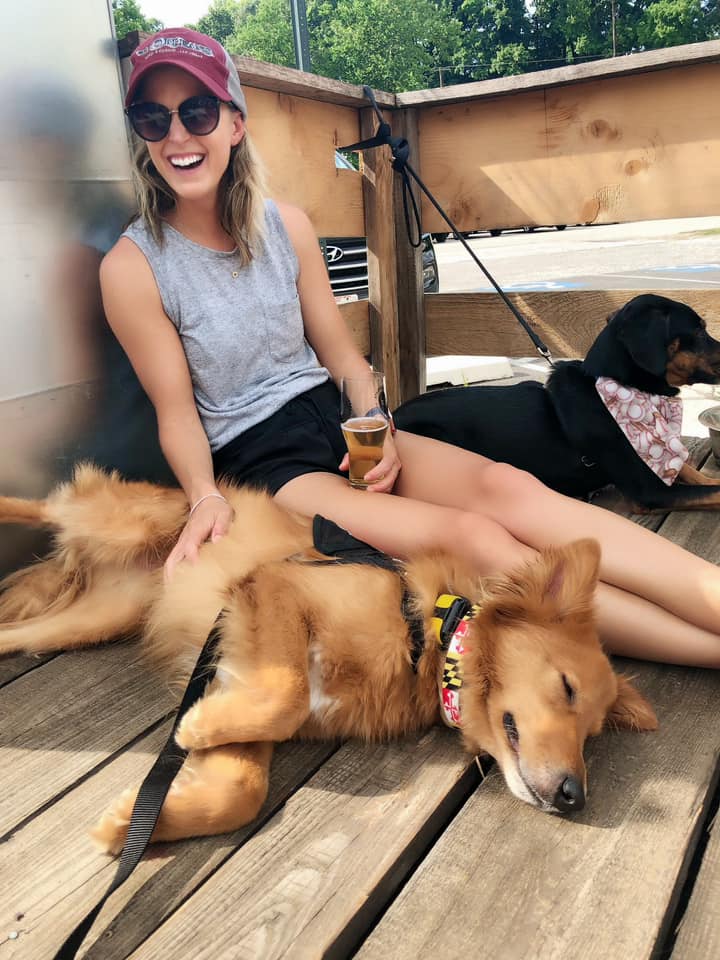 To say Julie and Josh are amazing is an understatement. Before sending Jax to their B&T program I was lost and felt like I was out of options. He was extremely possessive over me. Jax would resource guard me, the couch, the bed, my room… basically anything where I was. He would lunge and growl at the window as people walked by, growl at car doors shutting.. even at the rain if it was hitting the roof or windows hard enough. My dad and bf were not able to hug me or get too close to me without Jax reacting. He could not be out during family functions or when friends were over. He had a few bites on his record as well. Two of the worst ones included him biting my bf in the face as he went to hug me (we were on the couch..first mistake) and my roommate on her leg when she was walking it the door. Before B&T I had worked with one other dog trainer and met with one other. Both were positive based training.. which made Jax’s behaviors worse.

Jax is not an easy dog, but they did not give up on him. It has been 7 months since he graduated and with Julie and Josh’s continued guidance and my consistent efforts, Jax has transformed into a new dog. This past weekend I was able to help out someone and have their dog stay at my place. This would have never been possible before training. Jax was able to relax on place and co exists with another dog in the house! We all went on an off leash hike together and then to a brewery afterwards. I never thought I would able to take him hiking without him lunging at people/other dogs and to a brewery without him resource guarding. This is everything I ever wanted and more . I CAN NOT THANK THEM ENOUGH ????

Bennet is doing great since graduating! I can’t believe what a super listener he is and I love that ‘no’ is a word that really means something to him. I let him go leash free a lot more now, stress free.
We still often use Place for when new people are entering our house which has been a game changer for us. Thank you, thank you.

Murphy the Gr8 Dane recently graduated from Julie’s K9 Academy’s 2-week board and train program. Before I go into what life has been like since our (including Murphy, since we also needed to be trained) training I think I should explain what life was like before. 18 months ago, we picked out a sweet little boy that was half the size of our French Bulldog. Life with a small Great Dane didn’t last long. We got him into a local “puppy” class however he quickly grew larger than most full-size dogs. As Murphy grew larger by the day so did his personality and wild behavior. In the blink of an eye life went from fun little puppy to GIANT Great Dane 115-120 lbs.

Our daily routine was anything but normal with Murphy. We would typically wake up and take him outside on a leash to go to the bathroom. We would pray to god he didn’t see another animal or person once we got outside. He would pull so hard sometimes that I would have to really hold my ground with him and essential try and muscle him around the yard. It was exhausting at times and so frustrating that he was driving us crazy and we couldn’t wait to get out of the house for some peace. Once we come back to the house from work or play he would just dart out of the kennel and act like a bucking bronco and was almost impossible to get him to calm down.

While attempting to walk him outside all he would do is pull us down the street sniffing and trying to get whatever moved. I was always worried that he was going to choke himself out or severely hurt his neck. Coming from someone who has always had dogs I never really put any value into teaching a dog how to behave until Murphy joined our family. We were always against the e-collar and prong collars mainly because I didn’t know how to use them properly and thought they may hurt the dog. Since walking him was a burden we almost never walked him in fear for our safety and others around us if he got away.

When people would come over to the house we would always ask that they text us when they got to the house, so we could properly try to wrangle Murphy into some form of submission. This never worked, and he would get so excited and would bark, jump, nip and get in everyone’s face. He often leans into people so hard that he can knock them over just from leaning on you, which he has done to several family members. Because of his size and strength, we really don’t want any kids to come over because we don’t know what he would do.

Taking him to the vet could have possibly been the worst day ever. He would go completely bonkers in the vet and it was the most embarrassing experience of my life with a dog. One day we had to take him to get his shots and we both dreaded this day. When we got to the vet he literally was uncontrollable. The vet couldn’t do anything to get him to calm down and became very frustrated with him. It was this day that will always stick out in my mind as my breaking point. I remembered seeing a video on Facebook of Maizie (Murphy’s sister) and mentioned this to my wife. After watching a few videos, we were convinced that Julie’s K9 Academy was the place. I said “I don’t care how much it cost but we need to do something” because this is no way to live with a dog. Someone was going to get hurt. We also later learned that Murphy’s brother Cletus also went to this training which reinforced our desire to send Murphy.

After contacting Julie, we scheduled Murphy for his 2-week board and train while we were on vacation. I can honestly say that this has been the best money I have ever spent in my life. When we dropped Murphy off on day 1 I thought for a split second that Murphy might give Josh, Julie and Gabby a run for their money. Within minutes Josh was walking Murphy like they have been doing it for years together. While on vacation my entire family (30+) watched all his progress videos multiple times a day and were all in disbelief. The day we picked Murphy up was very emotional for both of us because we have never walked a dog like Murphy before. It felt like he wasn’t on a leash at all even though he was. When we walked him off leash I was speechless and didn’t think this was possible.

Since coming home Murphy has been AWESOME beyond belief. He understands all the commands that he learned, and it is something that we practice all the time with him. Going on morning walks have been so gratifying that I can’t even put into words how this experience is life changing. We can take him with us wherever we go which is what we always wanted to do when we picked him out. We went out to a local restaurant for the first time with Murphy by our side and his sat in “place” the entire night while we ate and had a few laughs with some friends. Almost everyone that stopped by was so shocked at how well behaved he was being. One group came up to me and said that he was the most well-behaved dog they had ever seen. For the first time we were super proud parents and walked Murphy off leash back to the car to go back home. I can’t thank Julie Barber, Gabby Scott and Josh Hurlburt enough for everything. This has truly been a life changing experience for us and Murphy and we couldn’t recommend this place enough. 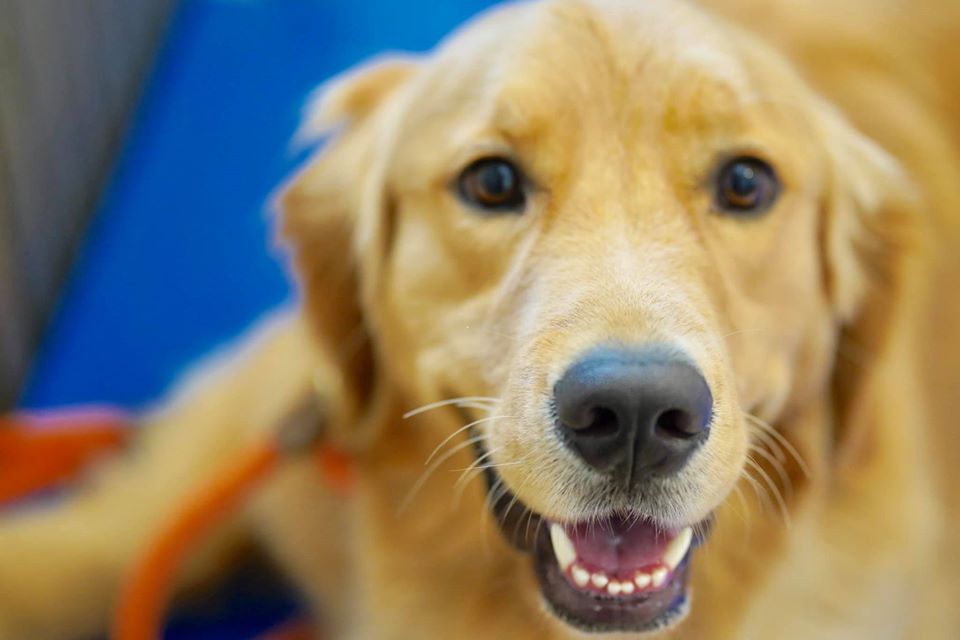 To say there has been a day and night transformation of our 1.5 year golden retriever after Julie’s training is an understatement! Gus is a high energy, VERY friendly dog who likes to jump on every human he sees, beg for food, had no concept of the word ‘no’. Now he is so well behaved, we never have to worry about having guests over or controlling his desire to be all over/on top of/jumping on anyone who walks through the door. He listens so well and is extremely obedient. I also can’t remember the last time I used a leash to walk him since the training. Julie’s K9 academy really changed our lives with Gus, the structure has added so much quality to our relationship with him! 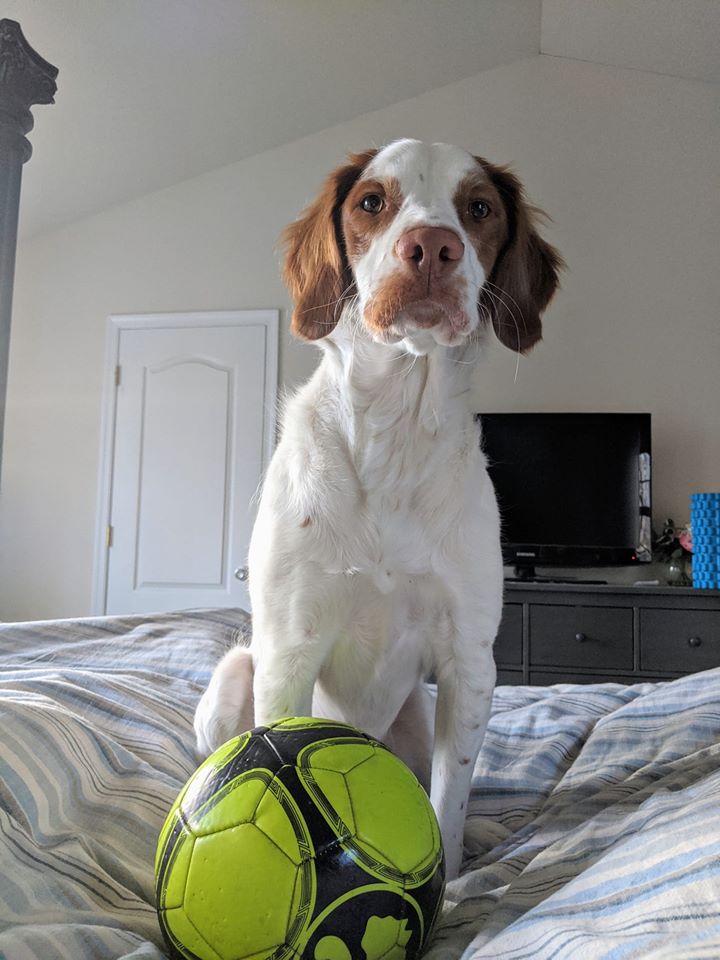 Julie, Josh and Gabby are amazing! We dropped off our 10 month old Brittany with them for the 2 week board and train, and we could not believe the well-behaved little man we picked up. Before training, it was miserable to leash walk him – pulling and all over the place. He would jump up on everyone! And the counter surfing and chewing things up was constantly happening.

When we picked him up, it was a dream to walk him – on and OFF leash! He places in the house and doesn’t get himself into trouble anymore.

Julie and Josh do a great job uploading videos and pictures of each dog regularly on Facebook, so you’re able to follow along in progress and continue learning more about the training process and methods. The go-home session is thorough, leaving you with a great sense of knowledge to then go home and continue everything with your dog.

Seriously cannot recommend them enough. The training was worth every penny, and if we ever get another dog in the future, we’ll be dropping him/her off with them again!

Thank you Julie, Josh and Gabby!!!